Who is Roy Hobbs?

Who is Roy Hobbs? Roy Hobbs is the character in the book, “The Natural,” by Bernard Malmud, written in 1952, and turned into a Hollywood production in 1984, thrusting the fictional baseball hero Roy Hobbs on the American public.

The book was hardly a best seller … the movie, however, has survived 25+ years and remains a staple of cable television, with Robert Redford playing the role of Roy Hobbs.

Ron Monks chose the name “Roy Hobbs” for his baseball organization in 1989. For Monks, the choice of Roy Hobbs was easy as he could see the parallels from the Roy Hobbs character to our own participation in baseball as adult amateurs. Roy Hobbs is drawn away from baseball at an early age and returns in later life to enjoy and appreciate the game for what it is. The history of Roy Hobbs as a fictional character is interesting since it brings several of our oldest mythological stories to new life.

According to Wikipedia, Author Malamud, supposedly not a baseball fan himself, created “the Natural” story and his Roy Hobbs character from the real life of Eddie Waitkus, a major leaguer in 1941 and 1946-55. He took the basic elements of the Waitkus story and wove them along with various baseball legends (notably Joe Jackson), into his morality tale novel.

Waikus, whose career batting average was a very respectable .285, started with the Chicago Cubs in 1941, returning to the Cubs in 1946 after WWII where he fought in the Phillipines and earned 4 Bronze Stars; he was traded to the Philadelphia Phillies in 1949.

Wikipedia reports that “Just a few years into the start of what seemed a very promising career, Waitkus was shot in the chest by Ruth Ann Steinhagen, an obsessed fan, on June 14, 1949, at the Edgewater Beach Hotel in Chicago.

“Steinhagen had become infatuated with him when he was a Cub, but seeing him every day in-season apparently kept her obsession in check. Once he was traded to the Phillies and would only be in Chicago 11 games in the season, her obsession grew to dangerous proportions. She checked into the hotel using the alias of a former high school classmate of his, and left a note at the desk asking him to come to her hotel room on an urgent matter. She then shot him with a rifle, the bullet barely missing his heart. He nearly died several times on the operating table before the bullet was successfully removed. Steinhagen never stood trial, but instead was confined to a mental institution. … 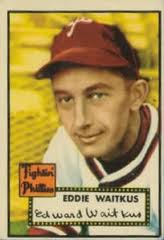 “The DVD extras for the 1984 film contain a biography of Waitkus, which points out that writers in his rookie year often called Waitkus “a natural”, a fact which Malamud presumably picked up on. Malamud’s version of the tale ended tragically, and unknowingly foreshadowed Waitkus’ own downfall as a player.

“The DVD biography makes the point that Waitkus essentially suffered from post-traumatic stress disorder as a result of his shooting, which ultimately affected both his career and his marriage. …”

Beyond the realities of the lives of both Waitkus and Shoeless Joe Jackson, Malmud touched on the Arthurian legend, which became a central theme throughout the movie. Like Arthur’s sword Excalibur, Roy Hobbs Bat, “Wonderboy,” holds mythical powers. It was even created from an act of nature, being made from a tree struck by lightning.

Roy’s quest is to become the greatest baseball player ever. Roy is tempted by a beautiful woman and, by allowing himself to be drawn from his “quest,” he is punished by being injured; disabling him from playing the game he loves.

Roy is driven to succeed finally, not through a quest for personal achievement, but through a desire to get Pop Fisher (The Fisher King) his grail, the pennant. Roy’s talent is finally realized through the unselfish pursuit of a goal for another person.

Roy fights his way back to the game as an older adult and, when tempted again, he chooses to protect the integrity of the game rather than sell it out for financial security.